Guardrails are designed to save lives; they prevent vehicles from driving off the road in locations where it is unsafe to be on the shoulder. However, the Trinity highway guardrail used in Oregon and most other states has been undergoing serious scrutiny. These guardrails are being described as dangerous.

Are these guardrails designed to save lives, or cause even more damage? 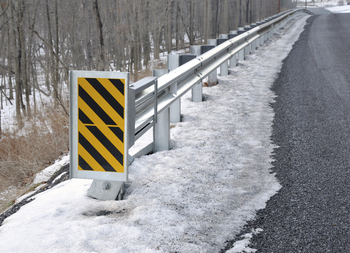 At the core of this question is an “unapproved” product change made by Trinity Highway Products, LLC to the railhead, designed to save about $2 for each part used. This change has the potential to cause the rail to malfunction. Here is how: If a vehicle hits the end of the guardrail instead of collapsing and being pushed to the outside, the guardrail can pierce the vehicle and cause catastrophic personal injury to the occupants inside. In the last few years, 14 lawsuits allege the defective and dangerous guardrails are responsible for 5 deaths and many more injuries.

What is the purpose of a highway guardrail? How extensively is the Trinity guardrail used in Oregon?

A highway guardrail is designed for a simple purpose; to protect vehicles from going over the highway shoulder. In case of an accident, the guardrail serves as a protective wall. However, in certain instances where the vehicle impacts directly with the end of the guardrail, it can become a deadly spear. The Trinity guardrail is raising concerns because of this potential defect and its use on Oregon highways. Oregon Department of Transportation’s (ODOT) initial reaction after becoming aware of the potential defect was to NOT join other states in suspending the use of the Trinity guardrail. ODOT reversed their position several weeks later after learning of a $175 million jury verdict against Trinity in Texas. Jurors decided the government had been defrauded by altering of design and false claims made to federal highway officials.

Problems with the Trinity highway guardrail

The ET-Plus, an energy absorbing guardrail, has had a number of issues reported by officials. For starters, a small portion of the guardrail head  (or the end terminal as it is known) is under suspicion of having an extremely dangerous defect, which could lead to the guardrail jamming and potentially cutting right through the vehicle on impact. Only recently, in a whistle-blower lawsuit, Trinity Highway Products was held responsible for defrauding the federal agency by hiding changes made to the ET-Plus product for over seven years!

A real-life example of injuries caused by the defective guardrails

As mentioned, the ET-Plus has a potentially faulty railhead that tends to “jam” on impact. Let’s take a look at what happened to Jay Traylor who filed a lawsuit against Trinity Industries on the 27th of January 2014. Traylor fell asleep behind the wheel of his vehicle and claims that when he woke up his SUV had slammed against the end terminal of the guardrail. Because of the crash, he lost both his legs. According to his lawyer, instead of absorbing the energy from the crash, the guardrail penetrated through the floorboard of his the vehicle causing massive, life-altering injuries. The lawsuit claims the guardrail did not perform as intended and was “defective and unreasonably dangerous.”

What action has Oregon taken to combat these issues?

After a $175 million verdict was awarded against Trinity Industries, the company has announced it would stop selling the product until further tests could be completed. ODOT has begun a review of the 2,500 miles of Oregon guardrails and 22,539 end-terminals, looking to identify the locations where the potentially defective ET-Plus ends have been installed. Hopefully, this will lead to the replacement of the problematic components.

This case represents a perfect example of how a court of law is sometimes the most effective way to obtain justice and impose corrective change when you have been the victim of a dangerous and/ or defective product accident. To learn more about the types of product liability cases I specialize in, please visit my Portland dangerous and defective products page.

You May Also Enjoy: Double Drowning, Wrongful Death Suit Settled with the City of Seaside >>

I represent personal injury and accident victims in the Portland Metropolitan Area, Multnomah, Clackamas and Washington Counties, and throughout the state of Oregon. I provide this Blog as an educational and informational service for Oregon residents.  It is not intended to be legal advice, as every case is unique and should be accurately evaluated.

If you or a family member have been in an accident and would like a FREE professional consultation with an attorney, call me at (503) 444-2825, or email  travis@mayorlaw.com to learn more about your legal rights.