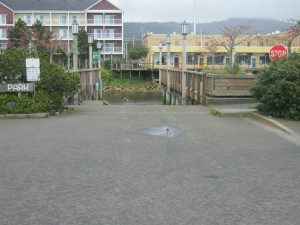 Seaside, OR May 13, 2014 – In April 2011, according to the lawsuit filed with the Clatsop County Circuit Court (Case No. 13-2240), Robert Weston MacNeil and Karen Irene Stevens, of Vancouver, Wash., drowned after mistakenly driving their vehicle into the Necanicum River at the Quatat Park boat ramp. The boat ramp was an unmarked, unobstructed roadway terminating directly into the river in the middle of downtown Seaside.

With the help of Oregon wrongful death attorney Travis Mayor, the family of Robert MacNeil obtained an out-of-court settlement of their wrongful death case against the City of Seaside.  The family of Karen Stevens also settled their case against the City of Seaside. Last week, each estate obtained probate court approval to settle the cases and settlement documents were finalized for confidential amounts.

The lawsuit (Case No. 13-2240) claimed the couple died due to the negligence of the City of Seaside for failing to install a barrier to traffic approaching the entrance of the boat ramp, as well as, failing to provide visible “warning” signs and adequate lighting in the area. According to the Compliant, the City also breached its “duty of care” to provide a reasonably safe roadway by allowing surrounding bushes to overgrow and obstruct visibility of an existing stop sign.

Travis Mayor, the attorney representing MacNeil’s estate, said, “We believe this city street that ends directly into a boat ramp, in the heart of downtown Seaside, is a very bad idea if the City fails to warn approaching drivers of what lies ahead. It is a death trap. Thousands of tourists flock to Seaside each year, and these people are not familiar with the ins-and-outs of each street. The boat ramp is especially deceiving at night and during bad weather where it appears to be a continuation of the street.”

On March 29, 2014, according to The Daily Astorian, another car accidentally drove off the Quatat Park boat ramp into the Necanicum River. The details of this incident conclude all three occupants of the car swam to safety and did not require medical attention, while their vehicle sunk to the bottom of the river.

“The Necanicum River is under tidal influence from the ocean. At high tide the ramp is more dangerous for unsuspecting drivers who accidentally enter the ramp because of the shortened distance to the water,” Mayor said. “On the night that Wes and Karen drowned, it was high tide.”

According to witness accounts and documents obtained by attorney Travis Mayor, there had been previous incidents over the past several years at the Quatat Park boat ramp of people accidentally driving into the river or having near misses.  It has been stated, the City of Seaside knew about these prior incidents and failed to do anything about it.  It was only after Wes and Karen drowned when the City of Seaside installed a sign alerting drivers that the road terminated in a boat ramp.  However, the City did not install a gate or other barrier at the top of the boat ramp to prevent further accidental vehicle submersions and drowning.

“The City of Seaside has made some minor safety improvements to the boat ramp since these two drowning deaths, but it is not enough. If further action is not taken such as the installation of a gate or barrier at the top of the boat ramp, there is a serious risk for future liability and more people may be injured or killed,” said Mayor.

The Oregon personal injury law firm of Mayor Law, LLC is based in Tigard, OR. Owner and principal attorney Travis Mayor has extensive experience helping people who have been injured in car, bicycle, motorcycle, truck, and pedestrian accidents. He focuses much of his efforts on catastrophic injuries and wrongful death claims. For more information, call (503) 444-2825 or visit www.mayorlaw.com.