In 2016, Oregon Personal Injury Protection (“PIP”) insurance will undergo several significant changes which will benefit Oregon drivers who are injured in serious auto or pedestrian accidents. The new law, Oregon Senate Bill 411, will take effect on January 1, 2016, and change the applicable timeframe to seek Oregon PIP insurance reimbursement and how/when economic and non-economic damages are reimbursed from PIP insurance. This is significant for some personal injury cases in that not all damages for medical bills and lost income have been incurred within the current defined time limits.

In addition, current laws provide for the reimbursement of PIP before non-economic are paid, effectively reducing the amounts paid to the injured person.

What is PIP insurance?

Every driver in Oregon is required to carry Personal Injury Protection insurance, frequently called PIP, of at least $15,000 in medical coverage. This coverage is Oregon’s version of no-fault insurance. If you are injured in a car, pedestrian, or bicycle accident, then your PIP insurance will pay for your “medical bills”, regardless of who was at fault, for up to 12 months after the accident or up to $15,000, whichever occurs first. PIP insurance will also compensate you for 70% of your lost wages (capped at $3,000 per month) for up to 52 weeks if you miss more than two weeks of work due to your injuries. Currently, if you settle with the at-fault driver’s insurance company and receive compensation for your injuries, then you may have to reimburse your own insurance company out of your settlement for the PIP benefits it paid for you.In many circumstances, insurance companies are entitled to PIP reimbursement before their insured customer who was injured is entitled to receive “non-economic damages” for pain and suffering. Because the insurance company is “first in line” to be reimbursed before non-economic damages are paid, this unfairly reduces the money available to the injured person. 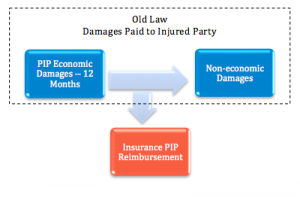 The insurance company should receive reimbursement of PIP expenditures, but be LAST in line! The priority should be complete recovery of the injured party, not the shareholders of the insurance company. This is what the new law will change in 2016. Commonly referred to as the “PIP make whole” rule, the new law will require auto insurance companies to waive their entitlement to reimbursement of the PIP benefits they paid out to their customers when their injured motorists, pedestrians or bicyclists have economic and non-economic damages that exceed the amount of PIP benefits they received.

Timeframe for PIP Coverage Extended From 12 to 24 Months

Under current law, Oregon PIP insurance will pay for your medical expenses up to 12 months after the accident. For most minor collisions, this is an adequate timeframe to recover from your injuries. But, what if you sustained more severe bodily injuries that require multiple surgeries, or extensive rehabilitation that cannot be completed within the 12 month period?

The new law targets this problem by extending the allowable time period for Oregon PIP insurance coverage up to 24 months after the car accident.

Under the new “PIP make whole” law, reimbursement of Oregon PIP insurance benefits to the insurance company thatpaid on the victim’sbehalf will be made only AFTER ALL of the economic and non-economic damages have been defined and paid. This change will insure that priority is placed on accident victim’s recovery and the ever increasing costs, and not insurance company reimbursement.

Actions You Must Take to Take Advantage of the New Law

As a Portland personal injury lawyer, my sole focus is to represent victims and their families who have been wrongfully injured as a result of another’s careless or intentional conduct. I hope this website is a place to learn more about our law firm, as well as, an educational resource for Oregonians who have been victims of accidents.  It is not intended to be legal advice, as every case is unique and should be accurately evaluated.

If you or someone you know has been injured as a result of a car, pedestrian, or bicycle accident, and you are looking for a skilled attorney to lead you through insurance roadblocks and confusion, please call today for a free and confidential case evaluation. Local (503) 444-2825, Toll free 1-800-949-1481, or email  travis@mayorlaw.com.

For more information on Oregon PIP insurance and its impact on recovering from Oregon accidents visit the following resources:

UM/UIM Motorist Coverage: Is it Necessary?