“You’re going the wrong way!”… Why does wrong-way driving still occur so frequently? Today’s blog will review what we know about common wrong-way driving characteristics, and how to avoid wrong-way driver car accidents in Oregon. My goal is to help you become more aware and execute defensive driving during particular hours of the day. 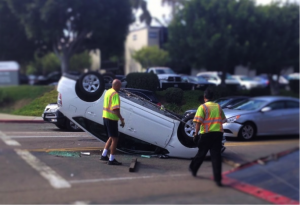 One would assume that with modern day signage, road design, vehicle sensors, and other improvements that drivers would stop driving the wrong way! Yet there are still a substantial number of wrong-way driver car accidents in Oregon and nationwide.

For definition purposes, wrong-way driver car accidents occur when a driver enters a lane of traffic heading the wrong direction toward oncoming traffic, and collides with one or more vehicles. As you can imagine, these collisions cause very serious injuries and often result in fatalities. Even at lower speeds these collisions tend to be substantial and deadly because each vehicle is traveling toward the other, which increases the destructive force.

In fact, studies have shown that wrong way crashes are more likely to be fatal than other types of vehicle collisions.

Similar to other types of car accidents, wrong-way driver car accidents can have a number of causes, but the National Transportation Safety Board (NTSB) has determined that the most common cause of wrong-way crashes is impaired driving. A driver who is under the influence of alcohol, drugs or both is much more likely to enter the wrong lane of traffic. This is especially true at night when clear vision and judgment is so important due to reduced visibility.

The NTSB conducted a highway special investigation report on wrong-way driving in 2012, and concluded that 69% of wrong-way drivers have a Blood Alcohol Content (BAC) greater than the legal limit of .08g/dL. The statistics also demonstrate that most of the wrong-way driving occurs between the hours of 12-5a.m. and peaks at 2a.m.

Driver confusion and inattention is another common characteristic of wrong-way driver crashes. Drivers who are lost, who are driving in an unfamiliar area or are generally distracted are much more likely to enter roadways going the wrong direction. According to the NTSB, wrong-way car accidents due to driver error are more common at night when signs are harder to see. Fatigue can also play a factor in drivers accidentally driving the wrong way in their lane of traffic. 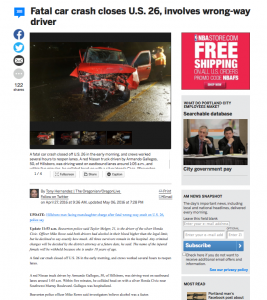 Common scenarios of wrong way driving car accidents include drivers who enter the freeway using the wrong onramp and drivers who turn the wrong way onto one-way streets in urban areas. In daylight hours and with busy traffic these drivers can often pull over immediately and avoid a collision. However, at night when there is less traffic and reduced visibility, wrong-way drivers can sometimes get up to top speed and drive for some period of time before they even realize they are going the wrong way. Oftentimes it is too late. This is especially true if the wrong way driver is fatigued or intoxicated.

If you or a family member have been injured in an Oregon wrong-way driver car accident, it is important that you seek the help of an experienced Portland personal injury attorney. Since the likelihood of significant personal injuries or death from a wrong-way crash are so high, it is crucial you are represented by a personal injury lawyer who understands the nuances of these types of cases.

If impairment or intoxication is involved you might have an additional claim for punitive damages against the wrong-way driver based on their recklessness. Claims for punitive damages require filing a special motion with the court to reach a certain threshold before the court will allow you seek punitive damages. Also, you might have a separate liquor liability claim against a bar, tavern or social host who provided alcohol to the wrong way driver when he or she was visibly intoxicated. As with punitive damages, liquor liability claims have their own set of requirements and legal obstacles that must be hurdled. Portland personal injury attorney Travis Mayor has the experience to investigate, pursue, and demonstrate what must be proven to maximize your financial recovery in your Oregon wrong-way driver car accident.

As a Portland car accident attorney, my sole focus is to represent victims and their families who have been wrongfully injured as a result of another person’s negligent, reckless or intentional conduct. I hope this website is a place to learn more about our law firm, as well as an educational resource for Oregonians who have been victims of accidents.  It is not intended to be legal advice, as every case is unique and should be accurately evaluated.

If you or someone you know has been injured as a result of another person’s conduct, and you are looking for a skilled attorney to lead you through the insurance roadblocks, please call today for a free and confidential case evaluation. Local (503) 610-0005 and Toll free 1-800-949-1481 or email  travis@mayorlaw.com.