What Is Defamation and How to Handle It 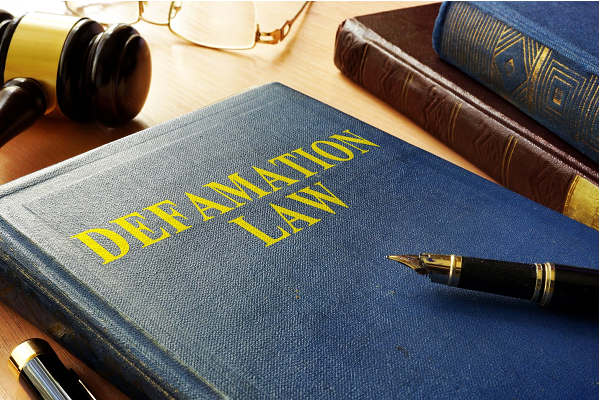 So, someone has said something untrue and less than nice about you or your business. Now what? While you might feel inclined to brush it off, it might be worthwhile to pursue legal action and take that person to court for defamation. To help you figure out if you have a viable case, we will briefly detail how you can detect and handle defamation.

Defamation occurs when a person creates and publishes a false, damaging, and unprivileged statement about a person or business. In other words, defamation is when someone tells multiple people something untrue about your business or your character, therefore damaging your reputation. There are two types of defamation: printed (libel) and spoken (slander). Libel is generally more permanent than slander, appearing in newspapers and other print media. However, defamers can technically publish both print and oral statements.

Defamation of character can happen anywhere—and anyone can do it. Defamation also occurs online; people will publish written or oral content to third parties. Libel and slander can even happen in online chats. Between modified photos, cyberbullying, and more, online defamation is certainly on the rise. Social media accentuates gossip, making words sound worse than they appear.

Have I been defamed?

You will know if you have been defamed if:

Even if all of these points are met, it can still be hard to prove defamation. Generally, an opinion, especially a “pure opinion,” is not considered defamation. Otherwise, every negative comment would find itself a seat in a courtroom. Opinions are usually too broad, and thus they are difficult to prove either true or false. In short, you cannot exactly take someone to court simply because you did not like what they said about you or your business. Plus, statements of opinion are privileged under the law.

People have the right to free speech; they are entitled to their opinions. But if a person’s opinion is a false a statement of fact, they are not protected under free speech laws. Therefore, something can only be considered defamation if someone asserts their opinion as fact. Also, like opinions, rumors are not defamatory unless they exist to harm somebody.

Even if someone attempts to defame you, there is a possibility that your lawsuit against them might not succeed. If this happens, how will you handle it?

How to deal with defamation

Because there is some gray area when it comes to what is and is not defamation of character, it can be close to impossible to stop. Luckily, it is often easier for private citizens to prove defamation and move forward. However, this isn’t always the case with a limited public figure, or a non-famous person who ends up in the public eye. The same can be said of celebrities. This is because, even if they win their defamation case, the negative stigma could be lingering burden to them. As such, proving the statement false is only the first step in recovering their reputation. Both average citizens and public figures need to prove that statements against them were made in actual malice. Defamation only occurs when the defamer wanted to do harm.

It is not fair to be falsely accused of something you did not do. However, if you believe that someone is attempting to defame you, stay calm and seek legal counsel. It is normal to feel angry and hurt, but stirring things up and trying to make things right without proper guidance can cause more issues. You probably want to defend yourself, but you need to keep in mind that reviving your reputation will take proper preparation. Defamation can cause people you know to give you the cold shoulder because they believe the false information they see or hear about you—and, in most cases, acting out will not help your case.

It is possible that, in order to defend themselves against your defamation claim, someone may argue that they are expressing their opinion. For instance, let’s say someone attempts to defame you. The defamer might say that they think you are stealing equipment from your office and that they also think you are incompetent at your job. First, they are saying these things without proof. Second, they are acting maliciously, hoping you will lose projects at work—or worse, lose your job entirely. Fortunately, they will not win because pretending that a “fact” is an opinion does not hold up in court.

Once you actually take legal action, you need to show evidence of the published statement. Bring any documents or writings that will support your claim.

But what about absolute and qualified privilege?

There are instances when people cannot be sued for defamation of character.

Absolute privilege protects a statement, even those made with malice. This can apply in a few different situations, including the following:

If you think you have been defamed, contact Mayor Law. Defamation law is often complicated, but Travis Mayor understands how to handle defamation and its many facets. He examines every situation carefully in order to determine a unique solution that fits each specific case. No matter who attempted to defame you, Travis will defeat the defamation claim and ensure that you receive the compensation you deserve.

Defamation is proof that personal injury is not always physical, so you can still call a personal injury lawyer to receive the help you need. Contact us today to discuss your case.