What is an uninsured or underinsured driver accident?

If you drive a vehicle in Oregon, then you are required to carry at least a minimum amount of insurance including: bodily injury and property damage liability, personal injury protection, and uninsured motorist. If you are involved in an Oregon driving accident and do NOT have at least the Oregon Mandated Minimum Insurance coverage, then you are violating the law by driving “Uninsured”. If you are involved in an accident and the other driver has the minimum coverage mandated by Oregon law, but the cost of your injuries and/or property damage exceeds the other driver’s liability coverage, then your “Underinsured” coverage can be used to cover some or all of your damages depending on your insurance limits.

For example, a client was struck by an uninsured motorist (the at-fault driver) and incurred $110,000 in medical expenses and auto repair bills. Because the at-fault driver was uninsured, the client was able to recover 100% of his damages by using his Uninsured Motorist coverage (which was $250,000).

In another case, a client was hit by an underinsured motorist who carried only the minimum mandated insurance coverage and sustained about $300,000 in damages. Because the damages exceeded both policy limits, $25,000 from the at-fault driver’s liability coverage, and $250,000 from the client’s UIM coverage, the client was only able to recover $250,000 because the current law does not permit the UIM coverage to be stacked on top of the liability coverage.

How frequently do personal injury car accident cases involve at-fault drivers who are uninsured or underinsured? 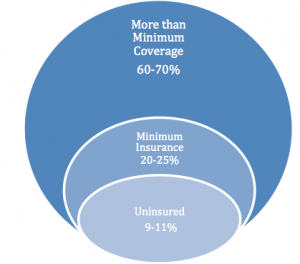 Unfortunately, approximately 9-11% of Oregon drivers are currently driving without insurance. Add to this percentage the number of drivers who carry only the minimum coverageand you getalmost 35% of Oregon drivers who have NO or minimal insurance. In a world where the average cost of a bodily injury car accident exceeds $126,000 you can see that uninsured or underinsured driver accidents can become a major problem.

What is the law regarding an uninsured driver accident?

Oregon law requires every driver to carry the Oregon mandated minimum insurance coverage. If you are involved in an uninsured driver accident then:

At the very least, fines, fees, storage costs, increased insurance premiums, and SR-22 fees will cost you $1,700 to $5,000, plus the liability for damages you may have caused in the car accident.

This type of case is more complex than a typical car accident case. Just because an at-fault individual drives without insurance does not relieve them of the liability to pay for your damages. Instead of dealing with an insurance company who is obligated to pay for reasonable damages caused by the at-fault driver, you can sue the driver directly. If you win a court judgement then the at-fault driver is obligated to pay the associated damages. The problem of course is collecting the money. If the at-fault driver’s net worth is low then the probability of collecting the damages will be low.

What does it mean when my underinsured motorist coverage (UIM) is “stackable”?

Currently and in the past, Oregon law allows insurance companies to claim an offset from your underinsured motorist coverage by the amount of liability coverage from an at-fault driver. Changes to Oregon law that go into effect on January 1, 2016 prevent insurance companies from reducing your UIM coverage, and require the coverage to be “stackable,” meaning additive. For example, if an at-fault driver, with minimum insurance coverage of $25,000 for liability, hits you and causes $100,000 in damages, then his policy would cover up to $25,000. You would think your policy’s UIM coverage would then kick-in and cover above the $25,000, up to your UM/UIM policy limits. Not so. Prior to January 1, 2016, insurance companies prevented coverages from being stackable. So, in the above example if your UIM coverage limit was $25,000, then you would receive $0 from your insurance company. If you had $100,000 in UIM protection then this amount would be reduced by $25,000 (the at-fault driver’s liability coverage). After January 1, 2016, the coverages become stackable, meaning you ADD your UIM coverage to the at-fault driver’s liability coverage.. To receive this new legal benefit, your auto insurance policy must be ISSUED or RE-ISSUED in 2016, otherwise your policy will contain the same exclusions allowed in 2015.

Is an uninsured driver accident an indication of “who is at-fault” in causing the accident?

Not necessarily, but it is a violation of Oregon law.  The facts of how the car accident occurred will determine which driver is judged to be at-fault or what the percentage of comparative fault might be for each driver. To be legally responsible for a motor vehicle collision and any injuries and damages caused, a driver must have caused the collision, regardless of whether that driver carries insurance or not.

Where can I find additional educational resources to protect my family against an uninsured or underinsured driver accident?