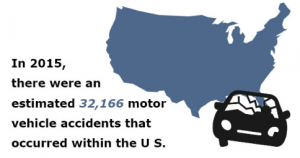 In 2015, there were an estimated 32,166 motor vehicle accidents that occurred within the United States. Any kind of crash can be devastating, but truck accidents are often the most catastrophic. Because of their sheer mass, trucks will automatically cause more damage than the average car when they’re involved in a collision. That’s why it’s so imperative that you practice safe driving habits when traveling in proximity to trucks. By understanding the actions that often lead to truck accidents, you can do everything in your power to avoid making critical mistakes on the road.

Time is of the essence when you are traveling near large trucks. Due to a truck’s size, a driver’s reactions won’t translate as quickly as they would in a car. Lane changes, turns, and stops need to be performed with more than enough time with a truck driver to react accordingly. You should never merge in front or behind a truck suddenly or make a risky turn in front of an oncoming truck. As a rule, you should allow a truck driver at least four to six seconds’ worth of space when traveling on a highway or in wet conditions. If you do not give a truck driver ample time to react, you could be putting both your and their safety at risk.

Did you know that trucks have way more blind spots than cars do? Semi-trucks essentially have four blind spots, which are located in the front, the back, and on either side of the truck. There’s a reason why these spots are actually referred to as “no man’s land” — they’re very expansive and extremely dangerous. The blind spots on either side of a truck can actually extend across several highway lanes and further back than you’ll find with a regular car. Their blind spot in the front includes the truck’s own lane and one lane to the right, as well. You must avoid traveling in these areas as much as possible. Do not follow trucks closely, always pass quickly and with care, and never drive on the right side of a truck when it’s making a right turn.

It’s easy to become anxious when you’re driving near a truck, particularly when you’re on a busy highway. But you must remember to exercise patience and refrain from rash behavior. You may simply want to get out of the situation, but erratic driving behaviors will likely make things a lot worse. Of course, you should not dawdle and spend longer than necessary in a trucker’s blind spot. But you shouldn’t let road rage enter the equation, as this could cause you to make a poorly thought out decision. Pay attention and realize that the 10 seconds you might save by making a risky move won’t be worth the damage it could cause.

It’s true that in certain cases, the truck driver in question may be to blame for a collision. But regardless of who is at fault, if you or someone you know has sustained a catastrophic personal injury due to a trucking accident, you should have a Portland truck accident lawyer fighting to protect your rights. For more information or to schedule a consultation with our personal injury lawyer Travis Mayor, contact us today.