What is the single most effective action Oregon residents can take to protect themselves and family members in a motor vehicle crash?

While it might seem like an obvious answer or a topic that has been overplayed throughout the years with national “Click It, Or Ticket” campaigns, seatbelts still cut the risk of a serious injury by 50%. Yet, I was shocked to learn that preliminary Oregon crash reports from last year indicate that 32% of motor vehicle occupant fatalities were NOT using safety belts.

Could we have a seat belt compliance problem in our own back yard? 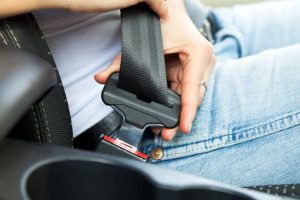 The NHTSA believes Oregonians are very seatbelt friendly and reports our percentage of compliance for seat belt use as one of the highest in the nation at 96% — substantially higher than the average US compliance of 90%[2]. Yet, other reports do not paint such a rosy picture. A statewide seat belt use survey reported 37% of front-seat motor vehicle occupants do not routinely use restraints, according to a KQEN News Radio[3].

In February, a statewide Oregon safety belt enforcement blitz was conducted for two weeks.  Officers focused on 1) enforcement of seat belt safety laws, as well as, 2) distracted driving and 3) speeding – the three most significant factors contributing to motor vehicle crashes and their associated injuries and deaths.

Initial reports of the blitz results were very telling. Washington County Sheriff’s Office reported during the 2-week blitz 145 seat belt violations were issued, along with 355 speeding violations[4]. Crook County Sheriff’s Office reported that in just one 29-hour period they made 35 stops for failure to wear seat belts, 9 stops for speeding, and 8 stops for distracted driving[5]. It is hard to believe that seatbelt violations exceeded both speeding and distracted driving combined!  Oregon wide statistics during the blitz included the following violations and contacts: 5,169 safety belt, 239 child seat, 5,944 speeding, 39 DUII, 767 suspensions, 149 felonies, and 9,609 other violations[6].

With such overwhelming evidence that seat belts save lives, why doesn’t everyone use seat belts? 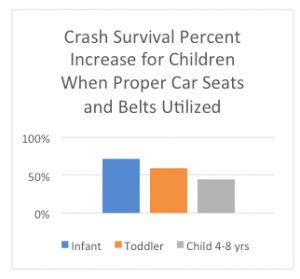 Seat belts really work – it’s important to remember they prevent your body from being ejected during a crash AND position your body so airbags can effectively absorb the energy of the crash and cushion your body. Ejection from a motor vehicle crash exponentially increases the chances of serious injury or death. 77% of all motor vehicle crash fatalities resulted from the occupants being ejected from the vehicle, according to National Highway Transportation Safety Administration (NHTSA) statistics. In other words, people not wearing a seat belt are 30 times more likely to be ejected from a vehicle during a crash.

By preventing ejection, seat belts greatly minimize the chances of motor vehicle crashes resulting in your death. In addition, NHTSA published a research report which explained the impact of wearing lap/shoulder seat belts on front-seat passengers. The report revealed that those who wore a seat belt reduced their risk of moderate-to-critical injury by 50% and fatal injury by 45%. 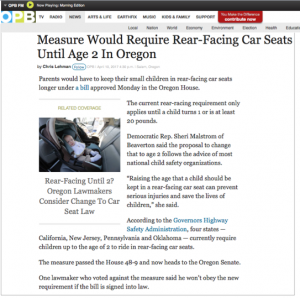 to 59% for toddlers. Additionally, child booster seats reduce the chance of nonfatal injury among four to eight-year-olds by 45% compared to seat belt use alone. Because children are a fraction of the size and weight of an adult, they NEED additional protection that seat belts alone cannot provide. Oregon law requires:

According to the Oregon Department of Transportation, there is no Oregon law specifically prohibiting children from riding in the front seat of passenger vehicles.  However, a rear-facing infant seat cannot be placed in a front seating position that is equipped with an airbag because this would violate Oregon’s requirement for “proper use” of a child safety seat[1].  In addition, there is a national “best practice recommendation” from NHSTA calling for rear seating through age twelve.

As a Portland Auto Accident Attorney, my sole focus is to represent victims and their families who have been wrongfully injured because of another’s careless or intentional conduct. I hope this website is a place to learn more about our law firm, as well as, an educational resource for Oregonians who have been victims of motor vehicle crashes.  It is not intended to be legal advice, as every case is unique and should be accurately evaluated.

If you or someone you know has been injured because of another person’s conduct, and you are looking for a skilled attorney to lead you through the insurance roadblocks, please call today for a free and confidential case evaluation. Local (503) 610-0005, Toll-free 1-800-949-1481, or email  travis@mayorlaw.com.