Hit By A Drunk Driver? Why You Need a Drunk Driving Accident Lawyer

Why You Need an Oregon Drunk Driving Accident Lawyer

Let’s face it.  Drunk drivers kill and injure other drivers, bicyclists, and pedestrians at an alarming rate.  Despite decades of anti-drunk driving campaigns and public safety awareness, drunk driving is still a big problem in Oregon and throughout the nation.  The cost of drunk driving measured by human tragedy and economic losses is almost too much to calculate.  To make matters worse, people who are injured by drunk drivers and their families often experience profound anger, frustration, and resentment because drunk driving accidents are completely preventable.

You Might Be Asking Yourself: Why are punitive damages a good thing for your Portland drunk driving accident case?

Victims of Oregon drunk drivers may also be able to pursue financial compensation from the provider of alcohol to the drunk driver.  This is called a liquor liability claim, which is also known as a dram shop claim.  When a bar, tavern, restaurant or social host serves alcohol to someone after they have become visibly intoxicated and that person drives away, crashes and injuries or kills someone, then the provider of alcohol can be liable under Oregon law.  However, liquor liability claims against negligent bars and taverns have their own set of complications.  They require advance written notice to the bar within 180 days of the accident or within a year if the drunk driver caused a fatality.  There is also a heightened burden of proof in dram shop claims, which makes them harder to prove.  Further, video evidence and witnesses from the bar are hard to come by unless the claim is investigated and acted upon quickly.

To add yet another layer of complexity to Oregon drunk driving accidents, when a victim of the drunk driver dies because of injuries sustained in the car crash, then the victim’s personal injury case becomes a wrongful death case in Portland.  Oregon wrongful death cases have additional requirements, this is where having an experienced Wrongful Death Attorney in Portland can be critical.  For instance, a personal representative must be appointed by a court to represent the decedent’s estate.  The statute of limitations for wrongful death accident claims in Oregon is three years whereas the statute of limitations for non-fatal drunken driving accident claims is two years.  However, the statute of limitations starts from the injury causing crash, not from the date of death if the victim died days or weeks later.  Also, the written notice requirement for an Oregon dram shop claim of one year must also be met.  Finally, the court must approve all wrongful death settlements and distribution to the decedent’s statutory beneficiaries.  If the victim’s statutory beneficiaries, usually spouses, children, and parents, cannot agree who gets what amount then the court must decide. 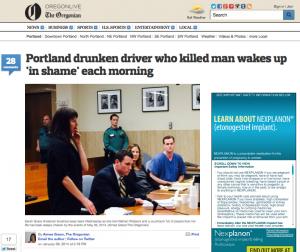 A 26-year-old Portland man who had been drinking in two Portland taverns was driving while intoxicated at around 2:00 a.m.  After crashing with one motor vehicle in SE Portland and causing injuries, the drunken driver drove off.  The driver of the other vehicle chased the drunk driver where their speeds got up to 50 mph in a 25 mph speed zone.  The drunk driver then ran a stop sign and collided with a van that was driving through the intersection with the right of way.  The drunk driver injured people in both vehicles and killed a passenger in the van.  This case involves multiple personal injury claims and a wrongful death claim.  There are also potential liquor liability claims against the bars where the drunk driver was drinking prior to the Portland drunken driving accident.  One hour after the crash, the drunk driver’s blood alcohol level was 0.19%.

Because there are multiple claimants, the injured victims and the estate of the person who was wrongfully killed may also need to explore whether they have potential underinsured motorist (UIM) claims with their own insurance companies.  In cases with multiple serious injuries and death, the drunk driver does not usually have enough insurance to compensate all of the victims.  Finally, the victims can pursue punitive damages against the drunk driver and possibly the bars that served him alcohol, depending on the circumstances.  All of these issues only concern the civil remedies available to the victims and their family.  Last month the drunk driver was sentenced to 7 ½ years in prison in Multnomah County Circuit Court for the fatal Portland car accident and non-fatal car accident he caused.

I have litigated against drunk drivers and other responsible parties for almost a decade. I have recovered millions of dollars in compensatory damages for my clients, and I routinely pursue punitive damages on behalf of my clients to punish drunk drivers for their conscious disregard of the consequence of driving while intoxicated. In my experience, insurance companies will offer you and the other injured parties far less if you do NOT have a lawyer than if you do. Therefore, it is very helpful to consult with an experienced attorney to help prove your case and maximize your claim against all liable parties.

I do not take cases unless I think we can win and I provide honest evaluations. My initial consultations are always free, so call me at (503) 444-2825, or email at travis@mayorlaw.com.

I represent drunk driving accident victims in the Portland Metropolitan Area, Multnomah, Clackamas and Washington Counties, and throughout the state of Oregon.  I provide this Blog as an educational and informational service for Oregon residents – it is not intended to be legal advice, as every case is unique and should be accurately evaluated.   If you or a family member have been in an accident and would like a FREE professional consultation with an attorney, call me at (503) 444-2825 to learn more about your legal rights.