What Can Be Done to Stop Drunk Driving in Oregon?

Car accidents caused by drunk drivers remain one of the most frustrating, preventable crimes that spark great emotion and debate. This is clearly illustrated in a recent Texas case involving 16-year-old drunk driver, Ethan Couch. In February 2013, a teenager from a wealthy Fort Worth, Texas family pled no contest to consumption and possession of alcohol and was sentenced to probation, compulsory alcohol awareness classes, and 12 hours of community service.

Four months later in June of 2013, Couch would find himself once again facing criminal charges for driving drunk and causing an accident involving 15 people, which resulted in the death of 4 and the serious injury of 2 innocent people. The accident occurred after Couch was speeding at 70 mph in a 40 mph zone on a dark rural road. Couch, with a blood-alcohol content of 0.24, lost control of the Ford F-350 truck and crashed into several other vehicles. Couch and his seven teenage passengers all survived. And now for the really frustrating part of the story – after admitting guilt in 4 cases of intoxication manslaughter, Couch receives NO jail time, 10 years probation, and mandatory treatment in a rehabilitation facility. His defense team was apparently successful in using an “affluenza” defense strategy, stating Couch was unable to link his bad behavior with consequences, due to his parents teaching him that wealth buys privilege and never setting real boundaries. Outrage –  Is the word that best describes the reaction and mood of the nation after this news broke. 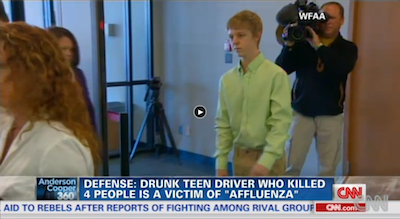 Can Justice Be Served?

While many argue over the appropriateness of the sentence, “partial justice” will most likely be achieved through the civil court system. As of December 2013, numerous civil law suits have been filed by the families of the victims against Couch, his family, and the family business. One of the lawsuits is seeking potential damages exceeding $10 million, to provide around the clock care for one of the injured teens who suffered a traumatic brain injury.

How Can This Behavior Be Stopped?

In Oregon, we are not immune to such cases. The year-over-year statistics indicate that alcohol is a factor in 5-6% of all reported crashes in Oregon, and it is a major factor in 37-43% of crashes resulting in fatalities. Examples of recent Oregon cases, as reported by the Oregonian include:

The National Transportation Safety Board (NTSB) has recommended that all 50 states adopt a lower blood-alcohol cutoff threshold of 0.05 compared to the current standard of 0.08. In addition, the NTSB recommended that states expand laws allowing police to immediately confiscate licenses from drivers who exceed the BAC limits, and require all first time offenders to have ignition locks that prevent vehicles from starting if breath samples exceed BAC limits. While these actions might prove to be unpopular in the US, more than 100 other countries have successfully instituted the lower limits (0.05 BAC) and saved lives.

Clearly, More Can Be Done

As a Portland drunk driver accident attorney, I have represented many innocent victims who were injured by drunk drivers who caused a car accident in Portland. It is never easy for victims and their families to recover from a debilitating injuries or wrongful death caused by a drunk driver. I encourage organizations like MADD and the NTSB to keep the public’s focus on this issue and the steps we can take to help eliminate or reduce these senseless crimes.  DUII checkpoints, police enforcement and stiffer penalties for drunk drivers could also affect positive change.

Unfortunately, until our society implements these needed changes, drunk drivers will still pose a significant danger to anyone who uses public roads.  If you have been injured by a drunk driver, it is critical that you protect your rights.  Law enforcement and the State will take care of prosecuting the offending driver through the criminal justice system.  However, that does not mean you will be compensated, reimbursed or made whole for your physical, financial and emotional losses.  Full compensation for injuries caused by a drunk driver is only available through the civil justice system.  Further, our civil justice system is completely voluntary and requires injured victims to pursue their own justice.

If you have been the victim of a drunk driving accident or have a family member hit by a person convicted of a DUI, then call me at (503) 444-2825, or email at travis@mayorlaw.com.  I would be happy to evaluate your case for free and provide my honest assessment. Because I work on contingency fee basis (meaning: I don’t get paid unless you do), and I do not take cases unless I think we can win.

I’d also like to know what you think – should Couch have received a tougher sentence?

I represent personal injury and accident victims in the Portland Metropolitan Area, Multnomah, Clackamas and Washington Counties, and throughout the state of Oregon. I provide this Blog as an educational and informational service for Oregon residents – it is not intended to be legal advice, as every case is unique and should be accurately evaluated. If you or a family member have been in an accident and would like a FREE professional consultation with an attorney, call me at (503) 444-2825, or email  travis@mayorlaw.com to learn more about your legal rights.