Aggressive Driving and Road Rage Cause 56% of All Vehicle Accidents

Car accidents caused by aggressive driving contributes to more deaths and serious injuries in Oregon than any other factor. Aggressive driving or “road rage” type behavior includes (but not limited to) following too close, speeding, radical lane changes, and aggressive gesturing or threats. In today’s blog, I review how to handle yourself and the actions you can take should you find yourself the victim in a road-rage incident.

According to the AAA, 56% of auto accidents involve at least one form of aggressive or “road rage” type behavior such as tailgating, speeding, radical or unexpected lane changes, or obscene gestures[1]. As an Oregon aggressive driving accident lawyer, Mayor Law represents car accident victims who are seeking compensation for their injuries and suffering, caused by aggressive drivers who clearly endanger peoples’ lives. 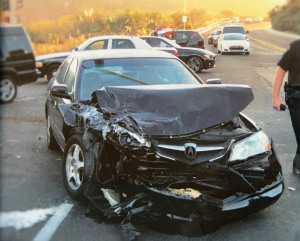 We have all seen, or maybe experienced, aggressive drivers who deliberately block cars from merging “into their lane,” angrily wave their fists, or aggressively tailgate or pass on the road shoulder. This type of driving is against Oregon law and routinely leads to very serious car crashes and injuries. The National Highway Traffic Safety Administration (NHTSA), defines varying degrees of aggressive driving, with road rage being at the extreme end. Aggressive driving, according to the NHTSA, is defined as “the operation of a motor vehicle in a manner that endangers or is likely to endanger persons or property” and is considered a traffic violation; whereas road rage is “an assault with a motor vehicle or other dangerous weapon by the operator or passenger(s) of another motor vehicle or an assault precipitated by an incident that occurred on a roadway” which can be a criminal offense.

What are the most common aggressive driving and road rage behaviors that cause serious car accidents?

Answer: According to an AAA commissioned research report, excessive speeding represents the most common aggressive driving behavior. For example, the Oregonian reported in June 2016, that Derrick Bruce clipped another car containing 3 passengers while traveling at a “high rate of speed.” Bruce was subsequently cited for reckless driving, which carries a maximum sentence of one year in jail and a maximum fine of $6,250. Another example of extremely aggressive driving was reported in June 2016, by KTVZ.com. A driver crashed head-on with a passenger car killing himself and a child in the other car. In total, 5 people were either killed or injured. The police cited excessive speed and unlawful passing as aggressive driving behaviors contributing to this fatal car crash.

What is Aggressive Driving or Road Rage? 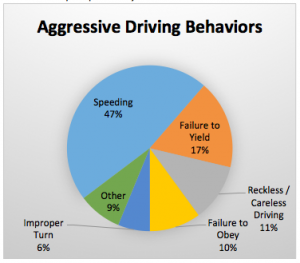 Answer: According to the NHTSA, aggressive driving is defined as “the operation of a motor vehicle in a manner that endangers or is likely to endanger persons or property” and is considered a traffic violation; whereas road rage is “an assault with a motor vehicle or other dangerous weapon by the operator or passenger(s) of another motor vehicle or an assault precipitated by an incident that occurred on a roadway” which is a criminal offense. Oregon statutes do not use the terms “aggressive driving” or “road rage.” Instead, Oregon law recognizes certain offenses and crimes, some of which include Careless Driving, Reckless Driving, Recklessly Endangering Another Person, and Assault 1 – 4.

Careless driving in Oregon is a serious traffic violation that has several levels of fines and penalties. You can be cited for careless driving if you drive in an aggressive manner that “endangers or would be likely to endanger any person or property.” At its less serious level, a Class B traffic violation, penalties are usually limited to fines ($300). If the offense contributes to an accident, then the penalties are increased accordingly, and may include community service, license suspension, and fines up to $12,500.

Reckless driving in Oregon is a criminal charge – Class A misdemeanor. You can be cited for reckless driving “if the person recklessly drives a vehicle upon a highway or other premises … in a manner that endangers the safety of persons or property.” Penalties can include fines up to $6,250, mandatory license suspension, and up to 1-year imprisonment.

Recklessly Endangering Another Person in Oregon is a criminal charge – Class A misdemeanor. You can be cited for recklessly endangering another person “if the person recklessly engages in conduct which creates a substantial risk of serious physical injury to another person.” This is a crime that includes driving and non-driving behavior.

Assault 1 – 4 in Oregon are criminal charges that range from a misdemeanor to a felony depending on the degree (1, 2, 3 or 4). These crimes can occur while driving a vehicle and while not driving a vehicle. While each degree of assault involves different standards of conduct, they charge arises from conduct that includes intentionally, knowingly or recklessly causing physical injury to another person.

How do I report aggressive driving and road rage incidents?

Answer: If you witness aggressive driving you can report these incidents by contacting your local law enforcement agency (non-emergency number 503-823-3333, or OSP), or by calling 911. Law enforcement will want a description of the car (make, model, color, etc.), license plate number, location and direction of travel of the reported vehicle, and the time of the incident. Whatever you do, DO NOT speed up to catch the vehicle, or confront the aggressive driver, in order to get this information. A good rule of thumb for determining how to report the incident (non-emergency or 911) is based on the actions of the aggressive driver. If you are verbally harassed or if the driver displays his IQ (flipped off) and moves on, then the non-emergency number should be used. However, if the aggressive driver goes further to threaten you, touch you, or make you feel endangered CALL 911.

What is the best way to deal with someone who is exhibiting Road Rage?

Answer: Dealing with road rage can be a dangerous endeavor. Your reactions can help prevent the situation from escalating further. You should:

Where can I get legal help for an aggressive driving car accident case?

Answer: Contact a Portland aggressive driving car accident lawyer. Portland Car Accident Lawyer Travis Mayor, is experienced in aggressive driving car crash cases, and we are uniquely qualified to prosecute your case. Oregon aggressive driving accident Lawyer, Travis Mayor is committed to seeking justice and maximizing the financial compensation for his clients who have been hurt as the result of another person’s intentionally aggressive driving or road rage actions. As a former insurance defense lawyer, Travis knows firsthand how insurance companies evaluate cases, pressure parties into “low ball” settlements, and execute trial strategies. This valuable insight from the other side of the table, combined with experience handling hundreds of personal injury cases, is the reason Travis produces extraordinary results. He knows how to effectively prosecute personal injury claims, and he has collected millions of dollars in settlements, jury verdicts and arbitration awards for his clients.

Dealing with aggressive driving accident claims is a difficult and complex task. Insurance companies and legal defense teams are schooled in how to approach and defend aggressive driving auto accident cases. Depending on the facts of the case, they typically pursue strategies designed to place blame on the victim or at least create an impression that the victim contributed or caused the crash with their unreasonable behavior. The insurance company may even try to deny insurance coverage for their driver’s “intentional conduct” as insurance companies only cover careless, negligent and reckless driving. It is necessary for you to go on the offensive and obtain the legal resources to investigate the accident, and gather supporting facts and witness statements before evidence disappears and witness’s memories blur.

“I have reached final settlements that were 10x times greater than the initial offers simply because we do not shy away from litigating cases.” – Aggressive Driving Accident Lawyer, Travis Mayor

In the early stages of the case, the defendant’s insurance company or attorney will typically make an “initial low-ball” settlement offer, without admitting fault, in an attempt to make your claim go away. They are testing your resolve to pursue the case. Having legal representation on your side who is not interested in quick, but unfair settlements, sends a clear message that we have a great case and won’t settle for low-ball offers. In many cases, I have reached final settlements that were 10 times greater than the initial offers simply because we do not shy away from litigating the case, please learn more by visiting on our case results page.

Proudly Getting results for Oregon families

As a Portland auto accident attorney, my sole focus is to represent victims and their families who have been wrongfully injured as a result of another person’s negligent, reckless or intentional conduct. I hope this website is a place to learn more about our law firm, as well as an educational resource for Oregonians who have been victims of accidents.  It is not intended to be legal advice, as every case is unique and should be accurately evaluated.

If you or someone you know has been injured as a result of another person’s conduct, and you are looking for a skilled attorney to lead you through the insurance roadblocks, please call today for a free and confidential case evaluation. Local (503) 610-0005 and Toll-free (800) 949-1481 or email  travis@mayorlaw.com.