A Courtesy “Wave” : Should A Well-Intentioned Driver Be Held Liable For Injuries?

Should a well-intentioned driver who provides an, “all clear” wave to another driver, resulting in serious injury to other people on the road be held liable?

This is the question a Multnomah County jury could face if the recent lawsuit filed by Portland bicyclist Cynthia Lewellen goes to trial. Oregonlive.com repots that Lewellen, an avid cyclist, is suing two drivers after one of them struck her, leaving her in cardiac arrest with numerous bones shattered across her body. The second driver, she claims, gave the truck an O.K. “wave” signal to turn in front of him. Lewellen seeks $670,000 in damages from both drivers.

Unfortunately, this situation is not uncommon with the high volume of bicyclists on Portland roads. 6% of Portland commuters go by bike. This is the highest percentage of bike commuters for a large American city, and means more than 17,000 workers in Portland choose to bicycle. Portland has been named one of the top bike-friendly cities in America by Bicycling magazine for many years running.

While we are lucky to live in such a progressive city, bicyclists are still at a distinct disadvantage because they are without the protective surroundings of a vehicle and because drivers so often fail to look for them.

In Lewellen’s case, she did nothing wrong. She was riding her bicycle in a dedicated bicycle lane on a straight section of road.

The street view on Google Maps confirms this with certainty.

Further, the driver who hit her is clearly at-fault.  That part is easy to figure out.  He turned left across two lanes of oncoming traffic and a bicycle lane where he hit the cyclist.

Oregon common law requires drivers to keep a proper lookout for oncoming traffic and to yield the right of way.

Because the driver was driving his work truck within the course and scope of his employment for his employer, Matrix Services, Inc., his employer is also responsible under the legal doctrine known as vicarious liability.  This is no different than if a Fed Ex driver ran a stop light and t-boned another vehicle.  Fed Ex would be responsible because it was its truck being driven conducting its business.

The second driver who stopped and waved for the truck driver to make his turn across oncoming traffic may also be liable in this case.  While the truck driver always had a duty to make sure it was reasonably safe to make a left turn, this “well-intentioned” driver created a false sense of safety. It is also human nature to react to another driver’s courtesy and assume it is safe to go.  The article and lawsuit do not mention which lane of traffic the “well-intentioned” driver stopped in.  There are two lanes of traffic for each direction on this section of Highway 30 in addition to dedicated bicycle lanes.  Depending on which lane he stopped in as he waved the truck driver through, his vehicle may have obstructed the turning truck driver’s view of the oncoming bicyclist to a greater or lesser degree.

In any event, it may have been negligent for that driver to induce the truck driver to make his left turn without first looking to see if it was really safe to do so.

In all likelihood, the “well-intentioned” driver’s conduct contributed to the situation that ended badly for the cyclist.

In Oregon, if this driver’s conduct was a substantial factor in causing the accident, even though it was not the only cause, then the driver may be liable to the cyclist for his share of the fault.  Of course, a jury makes this determination.

in July of 2010, a Multnomah County jury did determine a driver who stopped and waved — allowing a second driver to make a left turn in front of him — 35% responsible for the crash that ensued. The plaintiff’s attorney argued the driver should never have directed another driver across two lanes of traffic when it simply wasn’t safe. The defense attorney described the defendant as the “archetypal Oregonian” and shouldn’t be penalized for trying to be courteous. None the less, four years after this accident, the 20-year-old victim still suffers painful headaches, vomits at random and has severe memory problems, according to her attorney.

In my opinion, as both a practicing lawyer who works to preserve the rights of injured persons and as a frequent driver on Portland’s roadways, a driver signaling another driver into an intersection is assuming a duty by doing so.

The person who (like the signaling driver mentioned in the above lawsuit) waves another into an intersection is making an affirmative assertion that he or she has a better vantage point from which to see traffic and that it is safe for the other driver to proceed. I believe if a driver does wave a car into the intersection and his actions directly cause harm, then he should be responsible for the injuries that his actions have caused.

On the flip side of the coin, if a well-intentioned driver waves you through or across traffic, DO NOT assume the coast is clear. Until you can confirm there is no danger of a collision with an oncoming vehicle, bicycle or pedestrian, do not make the maneuver on blind faith. 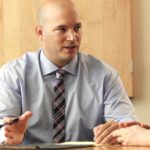 If you or someone you know has been injured in an accident and you are looking for a skilled attorney to lead you through the insurance roadblocks, please call today for a free and confidential case evaluation. Local (503) 444-2825 Toll free 1-800-949-1481 or email  travis@mayorlaw.com.