A pedestrian accident lawsuit has been filed by the law firm, Mayor Law, on behalf of a pedestrian accident victim struck by a pickup truck while crossing SW Hall Blvd in an uncontrolled, mid-block crosswalk. (Details of the accident and lawsuit covered by Oregonlive and The Times news sites) The lawsuit names the City of Tigard and the State of Oregon in 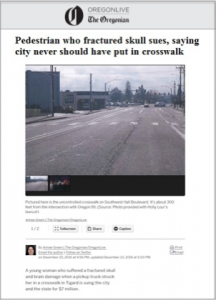 the $7 million-dollar lawsuit because they installed an uncontrolled crosswalk without completing mandatory safety studies and obtaining state approvals to implement the mid-block crosswalk. The city and state are responsible for evaluating, designing, and installing crosswalks in such a manner as to improve pedestrian safety, not create a greater pedestrian hazard. In this case, the suit alleges the city installed an uncontrolled crosswalk, across SW Hall Boulevard, without performing the appropriate pedestrian safety engineering study, nor obtaining approval from the Oregon Department of Transportation.

In December 2014, the victim, 19-year old Holly Lour, was crossing SW Hall Boulevard within the uncontrolled crosswalk. Both lanes of traffic stopped for her to cross, but after crossing the first lane she was struck by a pickup truck attempting to enter the left turn lane for traffic turning left on 99W. She suffered extensive injuries including a fractured pelvis, skull fracture, broken ribs, a collapsed lung, and worst of all a traumatic brain injury or TBI. Two years after the accident, Holly has undergone five major surgeries, but still suffers from cognitive damage to her brain. A condition that will most likely affect her for the rest of her life.

The complaint filed also alleges that the crosswalk she was using was known to be dangerous and on, “ODOT’s radar.”  In 2012, pedestrian Greta Helmer, 79, was also struck while crossing the very same crosswalk.

What is an “uncontrolled” crosswalk?

This would be a good time to clarify a few terms that are frequently interchanged and oftentimes confused. Most everyone knows what a “crosswalk” is — a portion of the roadway at an intersection or elsewhere that is distinctly indicated for pedestrian crossing by painted lines or other markings on the surface.

We are very familiar with crosswalks in “controlled” locations – i.e. sites controlled by a traffic signal or a stop sign. Drivers are used to slowing down and stopping in these in areas, and are often able to anticipate there may be pedestrians present.

Not All Crosswalks Are Created Equal

Recent crash data indicates Oregon has experienced a 28% increase in fatal accidents and an 18% increase in non-fatal accidents from 2014 to 2015, according to ODOT[1]. In 2015 there were 905 pedestrian accidents, of which 73 pedestrians were killed and 874 were injured. Most of these accidents were the result of drivers failing to yield the right-of-way to pedestrians crossing intersections and streets. The number one error amongst the pedestrians who were injured or killed was failing to use designated crosswalks, instead crossing the roadway somewhere between marked intersections. 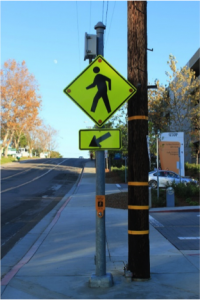 If a mid-block crosswalk is properly designed based on effective safety engineering checks, then sure, these crossings can potentially decrease the risk of pedestrians crossing between intersections. Mid-block crosswalks make it more convenient for people to reach their destination by eliminating extra walking to a street corner.

Yet, what happens when engineers determine that there are enough pedestrians to justify a marked mid-block crossing, yet it is not effectively analyzed or implemented? Poorly placed and designed crosswalks increase pedestrian-vehicle collision risks. They provide people with a false sense of safety.

Mid-block locations account for more than 70 percent of pedestrian fatalities.

Even when well-marked and lit, mid-block crosswalks are more dangerous that crosswalks found at controlled intersections with traffic signals. The problem is, many drivers aren’t expecting a crosswalk, down see them, and don’t slow down.

Prior to implementing mid-block crosswalks, a proper safety engineering study should be completed. This safety engineering study will determine if the proposed mid-block crosswalk location is warranted, and what safety “crossing elements” are required to produce a safe and effective result. The study analyzes various aspects of the proposed crossing location including traffic volumes, vehicle speeds, road width, motorist compliance, pedestrian volumes, drivers ability to see the crosswalk, and historical accident data. These factors help determine what safety crossing elements must be incorporated into the crosswalk design and implementation.

Implementing a marked crosswalk without incorporating proper safety elements can result in an accident rate that is 5X higher than if the crosswalk didn’t exist.

In some instances, simply marking a crosswalk without incorporating additional safety elements or treatments can result in an accident rate that is 5-times higher than if the crosswalk was UNMARKED! That means the crosswalk could be more dangerous than if it never existed at all!

Let’s look at some real examples. Would you recognize this as a midblock crosswalk while traveling at 30 mph? 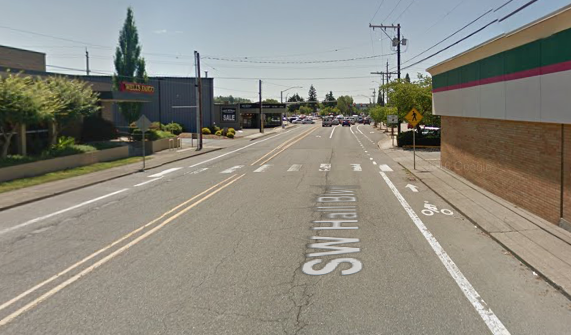 How about the same crosswalk at dusk? 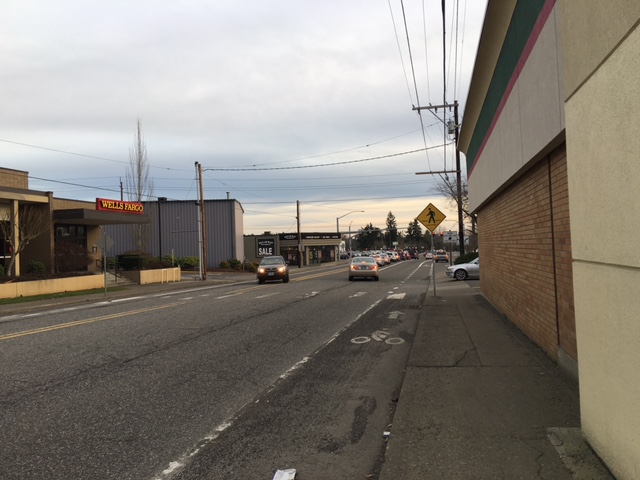 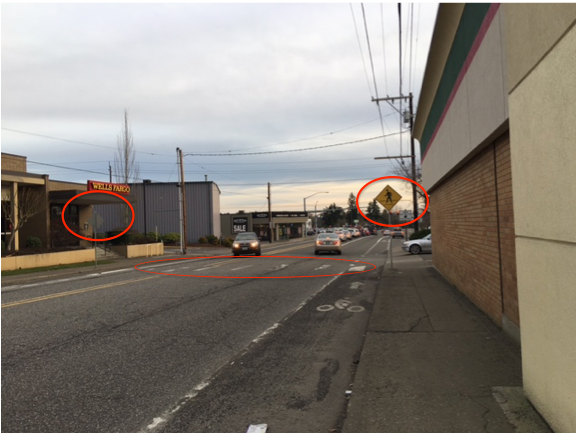 Here is an example of a pedestrian mid-block crosswalk, improved by the City of Portland since 2011. This picture does not show that the crosswalk signs also flash when a pedestrian is crossing.

Where do most pedestrian accidents occur?

According to the U.S. Department of Transportation, and confirmed by Oregon pedestrian accident data, most pedestrian accidents occur within crosswalks, and 50-70% of fatalities occur at mid-block locations[1]. These accidents are generally the fault of drivers failing to yield to pedestrians. Mid-block crossings are especially dangerous because drivers are not anticipating uncontrolled, mid-block crosswalks in dimly lit locations and where there is no intersection.

What is the process for determining where a crosswalk should be placed?

In Oregon, state law (Oregon Revised Statute 801.220) mandates where crosswalks exist, what they look like, and how they are used. The law also provides local municipalities with the ability to place additional crosswalks at mid-block locations when the need is justified to improve public safety. The process involves completing a safety engineering study and seeking approval from the State Traffic Engineer. This is a formal process where a written request to review and approve the crosswalk need, design, and implementation is submitted to the ODOT Region Traffic Manager[3]. Because the State of Oregon regulates all laws and regulations associated with use of their roadways there must be consistent standards and design requirements across all of Oregon roadways. Hence the need for state regulation and approvals.

Not always. In fact, a U.S. Department of Transportation study revealed, “… on multilane roads with traffic volumes above about 12,000 vehicles per day, having a marked crosswalk alone (without other substantial safety improvements) was associated with a higher pedestrian crash rate compared to an unmarked crosswalk.” In layman terms, simply installing a mid-block crosswalk designated with white painted lines yields a higher incidence of pedestrian-involved accidents – almost 4-5 times higher!

The Oregon Department of Transportation has published a brochure summarizing “What you need to know about Oregon Crosswalk Laws” that provides you with a basic understanding of who has the right-of-way on Oregon roadways. In another article written by Tigard’s Presiding Municipal Court Judge Michael J. O’Brien, Judge O’Brien states, “Oregon law requires drivers to stop whenever a pedestrian is in a marked or unmarked crosswalk. Every intersection has a crosswalk, with or without painted marks on the street. On roads with two or more lanes in each direction, it is unlawful to pass another vehicle that is stopped for a pedestrian. At traffic lights, wait until a pedestrian has cleared your lane and at least six feet of the next lane before making a turn. At other intersections, remain stopped until the pedestrian has cleared both your lane and the lane next to it.”

What is Oregon law related to driving and right-of-way for pedestrians in crosswalks?

The Oregon Department of Transportation has published a brochure summarizing “What you need to know about Oregon Crosswalk Laws” that provides you with a basic understanding of who has the right-of-way on Oregon roadways. In another article written by Tigard’s Presiding Municipal Court Judge Michael J. O’Brien, Judge O’Brien states, “Oregon law requires drivers to stop whenever a pedestrian is in a marked or unmarked crosswalk. Every intersection has a crosswalk, with or without painted marks on the street. On roads with two or more lanes in each direction, it is unlawful to pass another vehicle that is stopped for a pedestrian. At traffic lights, wait until a pedestrian has cleared your lane and at least six feet of the next lane before making a turn. At other intersections, remain stopped until the pedestrian has cleared both your lane and the lane next to it.” 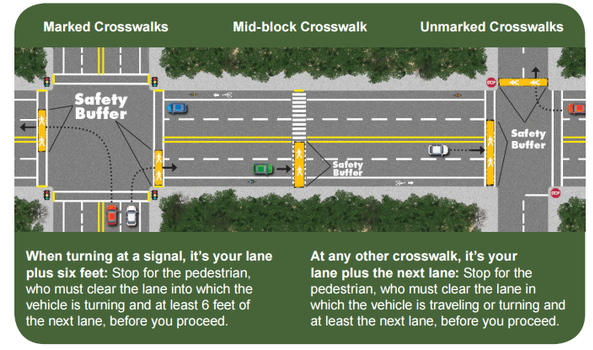 If you have an unsafe crosswalk in your neighborhood what can you do about it?

Contact the Transportation or Traffic Engineering departments of your local municipality and let them know your concerns. For example, if you live in Portland you can contact the Portland Bureau of Transportation. If you live in Tigard, you can contact Traffic Engineering. These city departments are constantly evaluating the safety of their roadways and if you have information that will help in their evaluations you need to speak up.

I provide this Blog as an educational and informational service for victims of personal injury and their families. It is not intended to be legal advice, as every case is unique and should be accurately evaluated.

If anyone in your family has been injured as a pedestrian, then you need to seek the help of a knowledgeable personal injury attorney. I am happy to discuss the details of your situation for FREE. Please call me call me at (503) 610-0005 or (800) 949-1481, or email me at travis@mayorlaw.com, to learn more about your legal rights.

7 Pedestrian Safety Tips I Will Teach My Children